Ministry of Health of the Republic of Kazakhstan 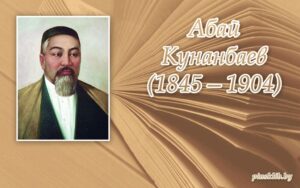 For the 176th anniversary of the birth of the great Kazakh poet and educator Abay Kunanbayev, the Library of the Elbasy has prepared a video. Abai’s creative heritage has enriched the history and culture of the Kazakh people, becoming its real spiritual heritage, never losing its significance.

As a poet, Abai raised the improvisational poetry of the Kazakhs to the level of classical poetry, expanded its subject matter, introduced hitherto unknown genres and forms. The rich heritage of Abai Kunanbayev is a remarkable phenomenon in the history of world culture. The works of the outstanding thinker have been translated into many languages of the world.

The first President of the Republic of Kazakhstan – Elbasy N. A. Nazarbayev in his article “Abai’s Spiritual Testament” said: “The great poet, brilliant thinker Abai became the founder of the era of Enlightenment and Awakening in the Kazakh steppe that began at the turn of the XIX and XX centuries, his priceless heritage became the moral guide of the people on the way to the future… I am sure that Abai’s words and ideas, which serve as the cornerstones of our modern everyday life, will continue to find concrete embodiment in our creative deeds and progressive aspirations.”